Forget the ballyhoo and let’s get on with it! 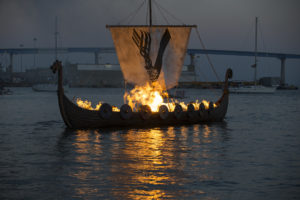 The last thing I wanted was to be a burden, me and my floating funeral cremains. Remember me as I lived and not just another corpse in goat skin boots and a linen kirtle heated to 1,400-degrees Celsius. Just invite friends and family. You’re going to have enough on your lead plate without having to explain why I’m wearing a four-plate iron, rounded-peak chieftan cap with spectacle guard, or why I didn’t buy life insurance when I took that job as a structural sawmill blade repairman.

Don’t make this a whole brouhaha. Shoot a flaming arrow into my buoyant pyre and gets-a-grievin’. Forget about dropping three grand on a gypsum rock at Wackerman’s Funeral Home. That kind of money goes a long way towards becoming a C-level archer at Hobocken Bow Benders on Route 41. Drawing a bow with 90 pounds of force — that’s been a coveted skill since the Battle of Stiklistad.

Keep it simple, sweetheart, and spread the fuel symmetrically before getting all Buckinghamshire on my rigor mortis ass.

You’ll appreciate my leaving this realm like a man, retreating into the sea with a just a few belongings atop my chest. I can smell them now, glistening with lighter fluid, my pair of 1909 Honus Wagner American Tobacco Company baseball cards, my unused wingsuit and the Longines Master Collection Chronograph watch that was too expensive to wear, let alone remove from the safe deposit box.

But that’s it. Keep it simple. Maybe light my 1968 Triumph motorcycle on fire and roll it into the water too.

Go ahead and sell the Sea-Doo. It only has six miles on the odometer. I couldn’t imagine taking meaningless possessions into the ground like an Egyptian mummy. Less is more, I always said.

If you can’t find a fjord in New Jersey, better apply for an ocean permit as soon as possible. We can have the ceremony at Brigantine Beach. It’s a wrought iron axe throw from the pier funnel cake stand where we met on work release.

For the pyre, find some nice elm wood that smells like vanilla when it burns, and be sure to split the rounds into flat slabs with a maul. Remember last July 4th when I told you I had a sawblade safety course and couldn’t go swimming with dolphins? I was really testing the buoyancy of different wood strains to save you the trouble! Boy, was that prescient! After a half-dozen attempts, I could build a workmanlike pyre in four and a half hours flat. Not bad. There are so many other things that will require your time.

Mother will want the traditional Catholic burial, of course. I wish I could see her face when you tell her you’ll be shooting a flaming arrow from the dunes that streaks across the black sky and arches down into my lifeless body instead. That’ll be rich. This Viking funeral is going to mend those fences between you two. Wait and see. Remind her how I always lit up the room.

Keep it simple, sweetheart, and spread the fuel symmetrically before getting all Buckinghamshire on my rigor mortis ass. Striking a receding raft 200 meters out to sea in the dark is nothing to sneeze at, but you’ll be fine after a few lessons.

Whoosh! I can see that arrow pierce me now. The whole raft will ignite. Oh, it’s going to burn. It’s a Viking funeral after all. But everyone shouldn’t feel compelled to watch me incinerate for hours. Don’t fight me on this – 45 minutes of immolation is enough. Be practical. Flaming arrows don’t grow on trees, so let’s consider your finances going forward.

I’d time this around a harvest moon, or blood moon, if I had my druthers. But I won’t have druthers. I won’t have much of anything left on this astral plane, unless you have a lopsided burn and the pyre collapses prematurely, displacing body my bits and pieces. Three kerosene arrows are enough. Let’s keep things in perspective.

Lastly, my love, revoke all former testamentary dispositions made by me and try to enjoy yourself.