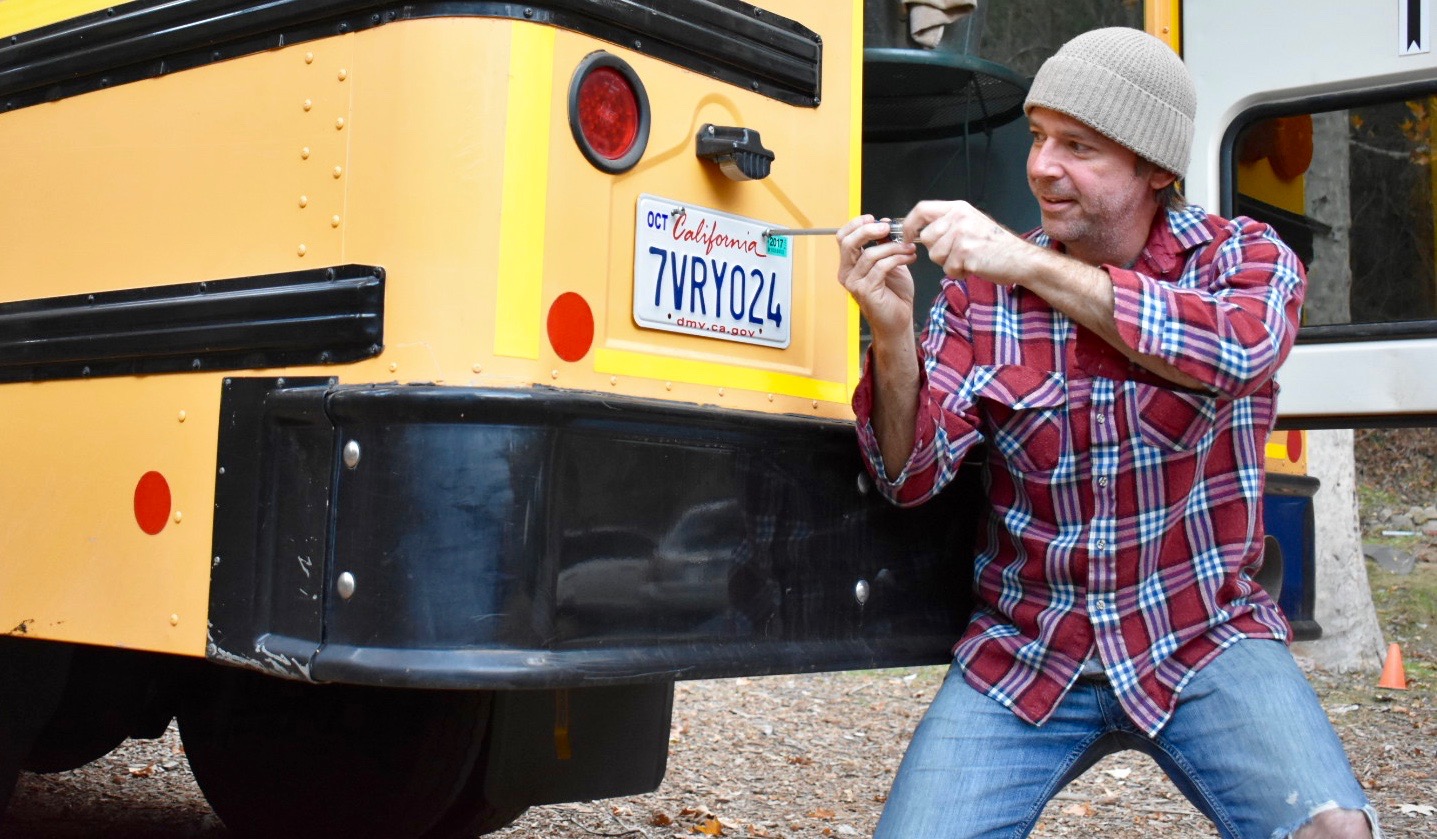 In California, they’re calling for an “atmospheric river”, but just between us, it’s a once-in-a-decade shitstorm of rain and snow. A godsend for the perpetually parched Golden State, but we’re not sticking around for it.

We’re taking the bus east to convert it with my family. Happy trails.

We’re a week away from pulling out of the canyon and heading to Philadelphia. This is happening. What do we do with our two mountain cabins? Who takes care of my pit bull, Jameson 33? Do we sell everything on the side of the road? Details, details, details. It’s too exciting. My stomach is in knots; either excitement or fear or both. The body reacts the same — that stomach churning, fight-or-flight cartwheel of adrenaline. Whatever. We’ll figure it out. We’ve got the bus and we’ve got each other. What else do we need?

“I think I need to see a doctor first,” Kitty says offhandedly.

She doesn’t have a cold. She feels like she has the flu — all the time, only it isn’t the flu. Whatever it is has been getting worse since we went to Arizona to go and bring our steel wheels home.

The bus brakes in my mind grapple to a halt, the turntable playing “How lucky can one guy get?” scratches across the vinyl. My somersaulting stomach stops and drops.

We stay positive, have to. Everything is going to be OK; we plan to move forward. Our “skoolie” sits outside my cabin, about 150 feet, across the leaf-carpeted, woodchip lot. The next step is to register this beast as an RV. I’m still driving a “commercial” vehicle without a commercial license, a gray netherworld of the skoolie-conversion process. How I got Progressive to insure me (after 6 other companies turned me down) I’m not sure, but the clock is ticking on the temporary tags. The costs are prohibitive and it’s not like I’m making any money with these commercial wheels. It doesn’t even have seats anymore, a drawback for anyone looking to use it as a bus. My 42-passenger ride now sits six.

I call the DMV to find out what I need to do — like the absolute minimum — to be considered an RV. The plan is to drive east and do the work there. I’m still operating with the idea that Kitty is fine and we’re a go … just as soon as her doctor pronounces everything fine. It’s got to be fine.

The woman at the DMV is vague.

“Looks like you need plumbing and living quarters to show it’s a livable vehicle,” she says.

“Basically, and maybe something to cook on?” she adds.

Plumbing? Hell, I’m not getting into all that. I don’t want to tear up the floor before we drive 3,000 miles to Philly. My kitchen and living quarters are easy — Kitty gave me a propane burner for my birthday and there’s a blow-up mattress stuffed in my closet. I head to Home Depot with 40 bucks in my pocket and spring for a planter box, a toilet seat, bag of peat moss and five-gallon, orange bucket. Voila. Compost toilet! I’m pushing it, so rather than set up an appointment with a ball-breaking DMV inspector, I find a vin-number verifier (who knew these existed?) online and pay him 100 bucks to come out to the cabin and sign off on my bus … I mean my RV!

“Yep, looks like an RV to me,” he says, barely glancing back behind the steering wheel. Doesn’t he want to take the compost toilet I built last night for a test ride? At least try the sink I created with a metal pan, 5-gallon jug of Arrowhead water and Meyer’s hand soap. What about the mattress I inflated at midnight (and had to patch after Jameson jumped on it)?

“You have the money?” He slides behind the steering wheel and reads the odometer. “You should check out that singer Fergie,” he says, stuffing a crisp Franklin into his jeans pocket. “Now that’s a cool RV made out of a school bus.”

The next day, I emerge from the DMV triumphant after emptying my checking account to pay tax and register the bus, a pair of shiny California plates in hand. It’s an RV! I send a picture to Camping Kitty, who’s been radio silent for a couple days. She answers in tears. She can’t get out of bed, her muscles ache like she’s been run over by a skoolie. Her doctors (it’s now more than one) don’t know what the hell’s wrong with her, which is even scarier. Up next, an “infectious disease” specialist.

“Maybe it’s mono,” she says hopefully. “I’m revisiting my youth, after chicken pox and having my tonsils out this year.”

“At least you’re moving into adolescence with ‘kissing disease’.”

But it’s not mono. It’s not leukemia or HIV or cancer or Lyme Disease or fucking Cat Scratch Fever (which would sound pretty cool). Thank God, but it’s nothing they can diagnose.

Two weeks later, we have no answers. The bus sits out in the woodchip lot back behind my cabin, a big yellow whale. They say an airplane is more dangerous on the ground than in the air, rotting and rusting from lack of use. Airplanes were built to fly, they were built for the sky. Our skoolie was born to rumble along America’s highways, an unstoppable force. We’re determined not to let it become the dream that got away. But with each passing day, it seems a bit further from my cabin, even while still.

Our hopes of spending Thanksgiving back east with my family slip away. Then Christmas. Finally, we get Kitty in to see a rheumatologist, and just maybe, we feel, we’re getting closer to an answer. Last week, I took her to the ER and the young doctor suggested all this pain and misery was in her head. We left the hospital with Kitty in tears.

When are you hitting the road?

That’s the new question everyone asks — neighbors, family, friends. Maybe there’s a taste of schadenfreude for the ones who called us crazy, seeing that big yellow, 15-ton metaphor stuck in the Topanga mud. But we know better, and with hope in our hearts, we move forward where we can. On New Year’s Day, we plan to load up the bus with everything we have and stage a roadside cabin sale. Sell it all. Hardly anything is going to find room on the bus, and that’s what’s so liberating — the freedom of the road coupled with the freedom from possession.

On New Year’s Eve, the skies open. That “atmospheric river” they’ve been calling for is finally here. It rains all morning and turns the canyon into a mud bath. It’s going to be a long day loading up the bus with Kitty feeling like hell. But it’ll be good for us to ride out in the bus, even if it’s just a couple miles down the road. It’s always healing, being together, a taste of the life we planned and put on hold. We’re in touch with each other and with life when we’re cruising in the bus. I find my keys, slop out to the bus and turn the key … click, click, click. The batteries (there are three!) are dead.

There are greater forces at work here. I give in, surrender. We have to accept we’re going to be here in Topanga for a while. As the mud gathers outside — between my cabin and the bus — we have to dig in till we have some answers. When Kitty is healthy, we’ll roll. Till then, I’ll hold her close.

A couple days later, it’s still raining. It’s been raining every day in arid California. I find myself sleeping later. Maybe it’s the weather. Maybe it’s the broken down bus. Maybe a touch of depression … when I feel movement in my bed one morning. I can barely open my eyes, but it’s Kitty. She slides in between the sheets, naked, after letting herself in and sustaining licks from my pit bull guard dog Jameson. She kisses me, starts to undress me. She’s beaming. I haven’t seen her like this in so very long — playful, sexy, quick-witted and laughing. Most of all, happy. It’s got to be a dream.

“I haven’t felt this good in months,” she says. “I think the clouds are lifting. I can feel it.”

The rain continues to pound my skylight above the bed, where we make beautiful, unexpected love. There is hope and joy and ecstasy in my bed this morning, and it seems like we can look forward again, even while reveling in the present. We’re back on track, hopefully. A new year. A new hope.

Outside my bedroom window, I can see the bus outside my cabin, parked in the mud of the woodchip lot. It looks closer than I remember. As if it’s right outside my loft. Close enough to touch.

(Of course, the nice thing about an “atmospheric river” is finding waterfalls that haven’t run in years. Like this one behind our cabin. Get wet, stay wild. — Jack)

“You know that bus we both liked?” I ask Kitty. “It’s in Scottsdale. Thinking of driving...