Ain’t that a conk on the head? 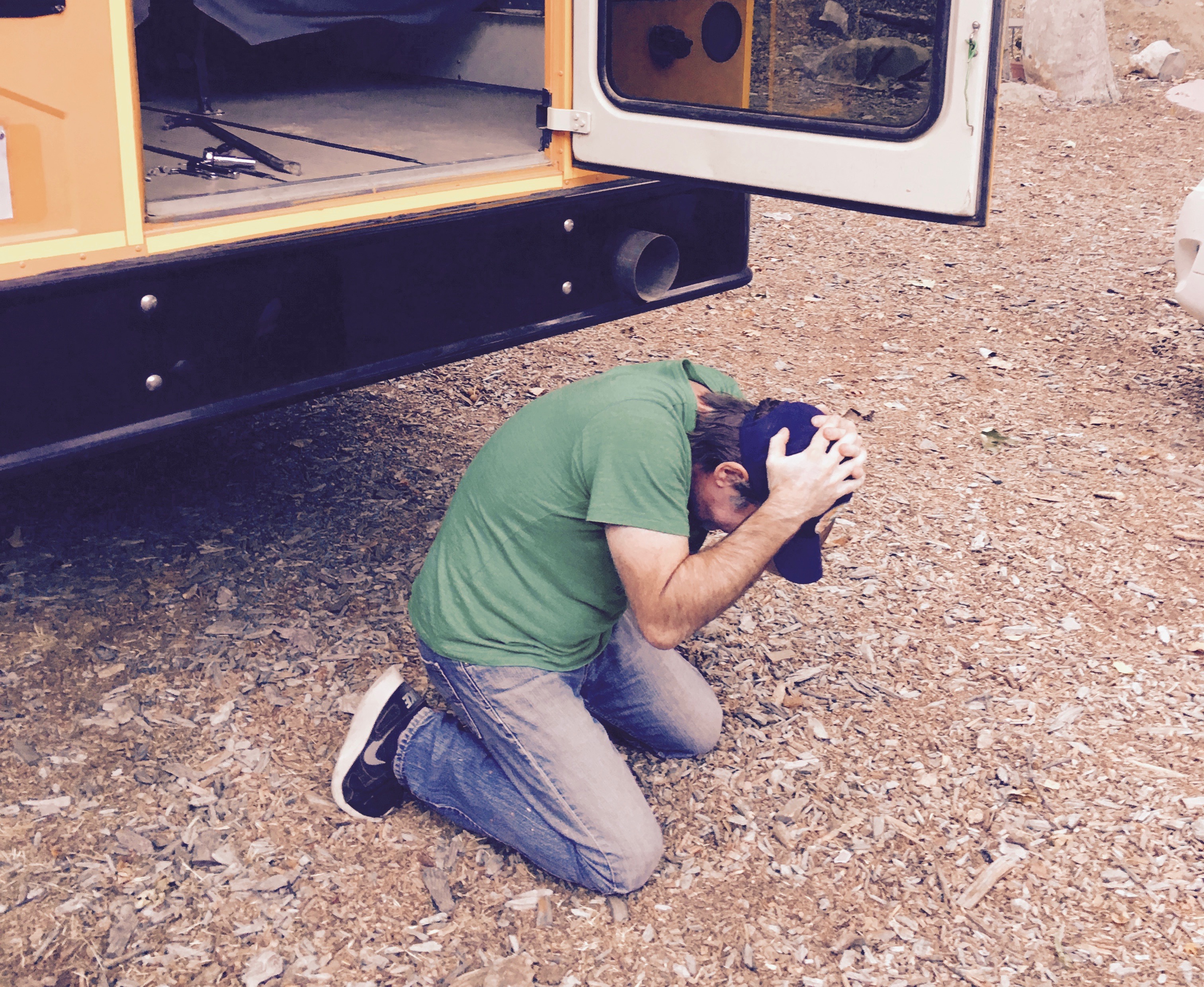 I’m afraid when I take my hands away my head’s going to split in two like a Warner Bros. cartoon.

We’re still in the Home Depot parking lot, Kitty and I, after buying a socket wrench to begin wresting free the dozens of 5-inch bolts that kept the school kids from flying around inside our bus all these years. They’re good and rusted and I’m still working on removing the first seat. I thought it’d be easier if I crawled underneath and undid the nuts instead. After loosening a few, I was excited to see if the bolts in the floorboard gave way. I scurry out from beneath the bus and launch myself skyward and …

Everything went black. More stars than you ever see in a Los Angeles sky. What was that noise? It sounded like someone swung a Louisville Slugger at a cantaloupe. Now I’m crouched down like Johnny Bench holding the two sides of my head together, realizing that wasn’t a fruit.

Kitty is holding me. She lowers my hands and slowly reaches to remove my ball cap. I don’t want her to. This ain’t gonna be good. I study the asphalt and wait for my head to paint it like Jackson Pollock with crimson blood reds and squishy brain matter grays.

My head is pounding, throbbing, and I can feel the knot on my noggin rising like Mount Vesuvius. But no lava. This is good. Kitty and I look at each other, then the open Emergency Door that clocked me, and know we dodged a bullet. Could have been bad. “Can you get me some ice?” I ask. “Yeah … but where?” We’re on the far end of the Home Depot parking lot, a quarter mile from the nearest orange smock. Not that they have ice anyway, but she ventures off to try. When she returns, I’m carrying on a conversation with some sketchy guy about the bus conversion, having forgotten I even banged my head.

Back behind the wheel of 30,000 pounds of steel, my head hurts, so we pull over at a liquor store and Kitty goes in search of some pain relief. If they don’t have Tylenol, whiskey will do. While she’s in the store, I play with buttons and controls in the bus; it’s all still new and foreign. I try all the lights and safety switches, then sit back to give my head a break. It’s too confusing. In the rearview mirror — one of a dozen rearview mirrors — there’s a line of cars stopped in the middle of the street. I wonder what’s going on, then shrug and sit back. It’s then I notice the Stop Sign arm on the side of the bus is sticking out into Topanga Canyon Boulevard like a Heisman Trophy. It’s flashing red lights have halted everyone that drove up behind us, all waiting for children that will never cross.

When we get back to my cabin, I fall into the couch. Kitty wants to know if I want her to cook dinner. Sure, I tell her. “Now or later?” she asks. I don’t know. Jameson, my dog, is staring at me. He wants to get outside. He needs a walk, I think, but maybe I should ice my head. I return his lost puppy eyes with a lost stare of my own. “Do you want dinner?” Kitty calls out. I feel like I should walk Jameson. But ice would feel good on my head about now. I can’t make a decision about anything and just sit there like a tuna sandwich.

When Kitty steps out to go feed Sunny, her cat, I nod off for a few minutes, then call her. Wasn’t she going to cook something? “I already ate,” she says. Wow, she couldn’t wait a few minutes? “I left you four hours ago.” Oh shit, she’s right. It’s 9:30. Did I ever walk Jameson? He’s still looking at me (maybe a trick of his).

“Are you all right?” Kitty asks.

“I think I’m a little concussed.” I realize I’ve been trying to log online and keep getting rejected. Might have something to do with typing in my wrong birthday.

The weekend, then most of the next week, then the next are lost. I sleep. I sit in the dark and hang out on the couch with Jameson. He loves it, thinks this is the new normal. And it is for a while. The shades are drawn during the sun-splashed California days, candles burn for light after dark. One seat is out of the bus. Hopefully the pace picks up.

Two weeks later, we’re back at it. This time, I tell Kitty I need her to crawl underneath the bus and hold each nut (and then later we’ll work on the bus!) while I unscrew the 5-inch long rusty bolts from the floorboards. She shows up in a sheer white midriff-bearing top and sexy denim overalls short as booty shorts. Her blond hair flows over her shoulders and she borrows my motorcycle goggles for protection. “Are these your work clothes?” She says she doesn’t believe in ugly work clothes (she sure doesn’t). “You should look your best no matter what you’re doing,” she says, just before crawling through the dirt and wood chips beneath the 2009 International diesel skoolie. She’s a bossy bottom down there, but that’s OK. She’s adorable.

One by one, we dislodge the rusty 5-inch bolts and toss them on the bus floor, the tinkling sound of success. Every seat we remove feels like a victory. We leave the front two in place for our upcoming drive across the country, to see my family in Philadelphia. We’re going to enlist my brother-in-law and nephews to help convert this bad boy into a tiny home. They’re car guys, mechanical guys, the kind who take things apart and put them back together for fun. I’m hoping to get them excited about re-imagining a school bus as a bomb ass tiny home of rolling thunder. But first, we have to get the fucking seats out. By dusk on Sunday, just before the sun slips behind the ridge of trees in the state park, they’re all loose but one because I can’t reach the bolts due to the wheel well. Let’s Flannel Jack this shit, I say, walking back to my cabin to find some bolt cutters and get to ripping away at the seat frame. When the steel finally splits, unlike my head a couple weeks back, I feel a rush of excitement.

The following morning, I dial up Max Scrap Metals to see if they’ll take a dozen germ-infested, schoolkid bench seats. Sure, they say. They’ll pay a nickel per pound. I pull into their tiny parking lot and begin dragging the seats out through that same rear Emergency Door. They’re solid steel, heavy, and I worry about them falling on someone, so I pay a nearby laborer ten bucks to help stack them on three rolling pushcarts, and we wheel them over to the office.

“What do you want me to do with these?” Max says. He doesn’t want them, says it’ll cost him more to pay someone to rip off all the padding and covers. We both stand there and look at the sad, rejected children’s seats. One thing I know is they aren’t getting back on the bus, which is still running about 20 yards away. I contemplate making a break for it, but it’ll take five K-turns to turn around in this little parking lot and flee. “I’m not paying you for these.”

“OK,” I say. “You can just have them.” I turn and make a beeline for the bus without giving him time to say no. I climb back on board, close the folding doors behind me and beep my way backwards out of the lot. A couple minutes later, I’m rolling east on Balboa Boulevard and feeling a lightness. The bus feels faster, lighter. I can’t decide if it’s the weight we just unloaded or because the entire back of the bus is now empty … open, new. It’s a big rolling steel shell that can be filled with possibility. It’s no longer a school bus, in practice or my mind. The option to keep this a commercial vehicle is gone, left behind on three metal pushcarts in Max’s Scrap Yard with a confused new owner of them.

I rumble back to Topanga feeling free and unburdened, with everything ahead of me, carrying nothing but dreams in the back of our bus (and in my clear, pieced together head).

All who wander are not lost

“You know that bus we both liked?” I ask Kitty. “It’s in Scottsdale. Thinking of driving...