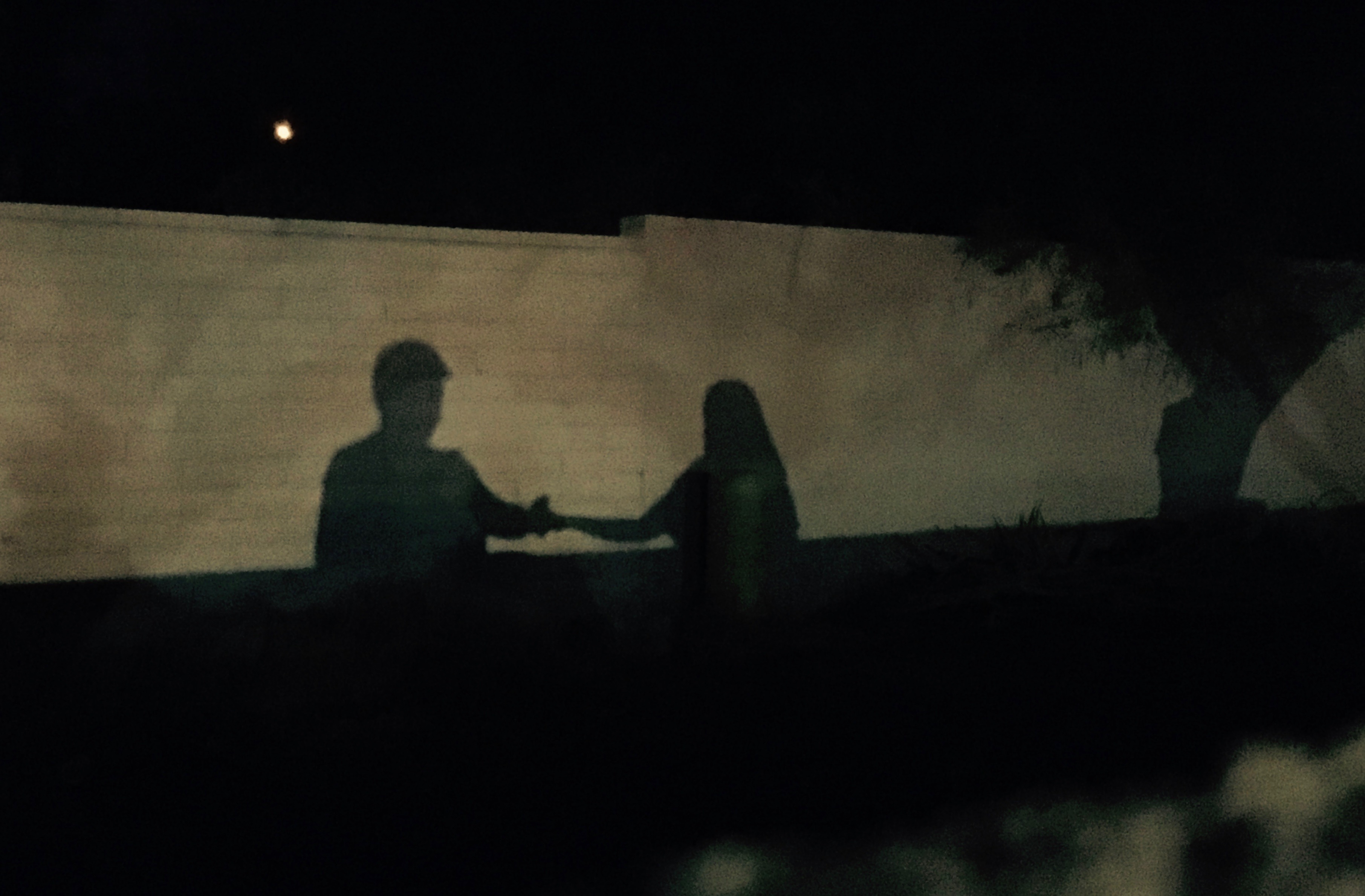 “You know that bus we both liked?” I ask Kitty. “It’s in Scottsdale. Thinking of driving out to look–”

“Let’s go,” she says before I can finish.

We stuff clothes in a duffle bag, drop Jameson with The Brazilians (Our dog-sitters are a house of Brazilian women. He doesn’t seem to mind being left there.) and steer 200 miles into the southwest desert, racing the sunset to get a glimpse of a 2009 International CE300 school bus before dark. The pictures online are bad-ass — seven tinted windows to a side, blacked-out 23-inch wheels and a body that looks tough as a boxing glove. It’s not a 70-seat behemoth or a short bus smaller than a Sprinter. It looks just right for me, Camping Kitty, Jameson and Sunshine the cat. It’s yellow, but mean with its squinting headlights and angled mirrors that would cut you in a street fight, more corporal punishment than clapped erasers.

A couple hours from Arizona it dawns on me it’s in another time zone. But don’t they ignore Daylight Savings Time? Who knows what the hell time it is, but we need to keep motoring along on I-10 East. I glance at the gas level … for the first time. Didn’t check it when we left and have no clue what’s in the tank, with all the excitement and Brazilians. The needle’s laying its head on E in the middle of the WWII Desert Training Center.

That sinking feeling in my stomach isn’t just from Kettle Cooked chips and a gas station burger, but it lifts when we spot a “Fuel” sign piercing the sky just off the next exit. There are three cars already at the pumps, so we wait. But these pumps — they’re stripped of all their casing, exposing their mechanical guts like some sort of retro-future, Steampunk installation.

“Well, what are all these people doing?” she asks.

There are no people, just cars, dead abandoned cars and gas pump skeletons like a post-apocalyptic ghost town. How many miles was it back to the last station, the one with the George S. Patton Museum and abandoned tanks being reclaimed by the earth? We have no phone reception, reminding me to reinvest in paper maps. We point our wheels back the way we came and see the gas needle drop way past E, like its heading for the tire pressure one gauge over. Finally, the good general’s stockpile of rusted, used tanks rise up from the earth like a scene from The Walking Dead.

We realize the car dealer’s name is Scottsdale, but it’s located in Phoenix, closer than we thought. We’re going to make it before dark anyway and pull into the industrial complex with the sun hanging low. I hurry to get out of the car when Kitty grabs my arm. “What’s up? He’s waiting for us,” I say. “Join me in praying to the adventure gods,” she says. She takes my hands and we close our eyes, asking the universe for guidance and the vision to determine if this is our future home and rolling fortress. “Help us tap into our intuition and follow it,” Kitty says. She’s beaming. This is what it’s all about — leaning on one another, entrusting the universe, no matter what happens with the hulking yellow beast in the fading light outside our front windshield.

I’ve never driven anything remotely like this bus — 30 feet long and 30,000 pounds of rumbling steel. The airbrakes almost sent me through the windshield stopping short in the parking lot. Six rear-view mirrors all call for your attention like neglected children every time you switch lanes. I feel like I’m rolling with General Patton in the Battle of the Bulge, able to crush anything that dares to stand in our path. Steering this bus is like moving the world, and it’s scary as hell for 15 minutes. Then it becomes a lot of fun. Kitty is laughing and jiggling on the back seats, reminding me how bumpy school buses were as a kid, but there was never a beautiful showgirl bouncing along with me on the way to St. Cecilia’s elementary.

It’s getting dark fast, so we agree to come back in the morning for another rumble down the roads of north Phoenix. Besides, it’s fun as hell. We’re already missing it when we drive off for the night.

We’re driving around Phoenix with a 6-pack and fading fast. It’s RV nation out here, meaning there’s no campgrounds that want tent campers. “We can car camp,” I tell Kitty, just before we spot a sign on I-10: “State Prison, next exit”. Below it, the familiar triangular blue sign that denotes a campground. Is it in the prison? We follow it because, hell, that’s what we do, passing the town of Buckeye and driving, and driving. The ride is way longer than we wanted and I’m looking beyond the shoulder for a suitable patch of dirt to pull over and rest. There’s a recreation area, but the sign says “no vehicles whatsoever.” The sign is riddled with bullet holes. The rec area is a shooting range, so we push on. Exhausted, I finally just pull over on the sand about 30 feet from the highway, and roll up behind some chapperal. I get out to take a piss and step on glass. Broken beer bottles are everywhere. The air smells of cattle, methane and death. I get back in the car, lock the doors and try to rest for a few minutes, the glow of prison spotlights across the highway illuminating the night sky. My heart is racing, my intuition tingling. The adventure gods are telling us to scram.

There’s an RV resort close to the freeway. Screw it, it’s late and we’re spent. We pull in, find an empty space and lie back but the desert heat is still stifling, so we lay blankets out on the ground beside the car and lie naked under the stars, drinking beers and sharing a smoke. Next thing I know, the sun is up and I’m feeling exposed, probably because we are exposed.

“Why?” she grumbles. “We’re not doing anything wrong.”

We’re lying naked in the sunlight with beer bottles scattered around us in the middle of a busy RV park. An elderly couple rides bicycles in a loop around the RV parking lot. I hate to be the “rational” one, but I gather up the blankets and nudge Kitty into the car, knowing a little old retired man in a golf cart is going to ride up any minute. The RV beside us has probably complained by now. Using the earth on that side of the car as our loo didn’t help ingratiate. A few minutes after we pile back inside a grizzled dude with tattoo arm sleeves rolls up in, yes, a little golf cart.

“Hey!” He’s pissed. “You’re gonna have to pay and then get the hell out of here.”

He’s thick with a long scraggly brown beard. Maybe a meth-head. Maybe packing a gun. Who knows. I make sure the car doors are locked and take my time putting my shoes on, out of spite, I guess, letting him simmer in the sun. “What’re you doing?” Kitty says. “Let’s get out of here.” I have no intention of paying for lying in the sand, so I speed toward the exit, knowing Mr. Golf Cart won’t be able to keep up. In the rear-view mirror, I see him raise his arm — maybe a fist, maybe flipping us the bird, maybe waving a good ol’ Phoenix goodbye and wishing us well on our adventures.

In the morning, we drive the bus all over town, even break into Scottsdale at some point, going on freeways and through strip mall parking lots. We’re kings and queens of the highway and think about trying a drive-thru when we realize my phone is at 1% battery. With no idea where we are, we use the last % to navigate back to the dealership. (Paper maps!) We end up passing on the school bus after realizing it has no AC (in Arizona?) and the price is steep before even converting it into our AdventureMobile. We just started looking, but it’s pretty telling how we stood in the parking lot looking at it long after we said goodbye to the salesman. This bus has got something. It has the “It” factor.

“You guys really like that bus,” the dealer calls over, driving off the lot himself and probably wondering why we’re being creepy.

It was a long night in Phoenix and camping by a state prison, shooting range and landfill sucked some of our enthusiasm for buying the bus. If we’d stayed at a hotel, slept, made love and showered, we might be driving home in a 2009 International CE300 school bus, but we head west on I-10 the way we came, saluting Gen. Patton from the pisser once more.

The night before, we were glowing after our first ride in the bus, drinking margaritas and feeling such joy, as if we’d already bought the bus. But the glow was more about the road that lies ahead, the shared life adventure and daily awe of waking up someplace new. The glow was the life we envision, becoming closer. We felt it driving around in the bus, whether or not it was the bus that made us feel it.

Ain’t that a conk on the head?

“Why are you holding your head like that?” I’m afraid when I take my hands away my head’s...

My last day in the cabin starts with morning wood — I’m tasting the floor after my blow-up air mattress...